Then And Now: Teaching In Japan by Neal Graham 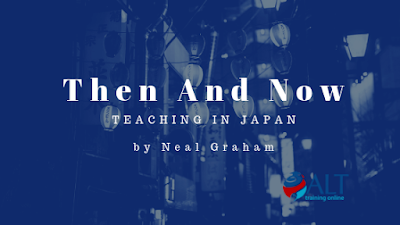 Bio: Neal Graham is an ALT from Canada. He first worked in Japan over 20 years ago and later returned to teach here again.He has a BA in English and a CELTA. He also lived in Japan for 5 years in the mid-2000s working in the eikaiwa industry. Before becoming a city ALT, he taught at the university level in Japan.


Foreward: The following is a now-and-then comparison based on my experiences as an ALT. This is not meant to be an absolutely definitive tale of the way it was versus the way it currently is. Rather, it’s just a few casual observations based only on my experience and my situation. There are differences between my employment situations now and then that may have affected my perspective. For example, now I am a direct-hire municipal ALT whereas I was a prefectural-JET ALT many years ago. Other people will have completely different experiences.

I was a prefectural ALT with the JET Program 22 years ago. I stayed in Japan for 2 years and then returned to Canada. A while ago I came back to Japan and now I’m working as a direct-hire city ALT.

A lot has changed in Japanese schools in those two decades.

Compared to other countries Japan is still a very cash focused country, although this keeps changing bit by bit.

When I first worked as an ALT in the late 90s, I was paid in cash.

Once a month I was handed an envelope filled with money. This surprised me. The school had set up a bank account for me on my first day, and eventually they did change me over to a direct deposit system, but the cash payments continued for a quite a while. Certainly electronic deposits were possible in Japan at that time. I’m not sure if that happens anywhere anymore. My current employer has been depositing my salary directly into my bank account since I was hired.

I remember some Japanese teachers in the school were regularly paid in cash. Was this because they preferred to be paid in cash? Or was it a systematic quirk of my school?

To accommodate all the cash floating around the teachers’ room, a bank representative would come to our school once a week to take care of our banking needs.

Salaries could be deposited, spending money could be withdrawn and other banking transactions could be facilitated. I opened an account at that bank (Oddly, it was a different bank than the one where the school had opened my main account) so that I could do some banking from the convenience of the teachers’ room. Perhaps there are some banks somewhere still offering this service today, but I haven’t seen it.

Another change I’ve experienced involves ALT school assignments. When I was a prefectural ALT in the 90s, each ALT was assigned to only one school.

City ALTs that lived in that prefecture were shared between two Junior High schools. I spent every day at the same school. Every student had a lesson with me at least twice a week. I was able to get to know my fellow teachers and all the students very well. I participated in club activities and all the school events. I attended teachers’ meetings. I was treated as any other teacher at the school.

Now, as a direct hire city ALT, I work at many different schools – sometimes more than one in a single day.

It’s difficult to get to know the students very well. Although I’ve gotten to know some, I don’t know them in the same way as I was able to 22 years ago. I teach more than 1,400 students across my many schools so it’s difficult to know all their names. I understand the budgetary benefits of having one teacher go to many schools, but those may come at the expense of other social and cross-cultural benefits.

The most significant change I’ve seen has been around smoking.

When I was an ALT 2 decades ago, smoking was allowed in schools. There was a lounge area in the teachers’ room of my school where teachers would gather to smoke during the day. Many teachers also kept ashtrays on their desks. There was also smoking in the library and in many classrooms. I’m not sure whether or not it was officially permitted in the classrooms, but it happened.

Since the majority of teachers at my school were smokers, their smoking habits were completely accommodated.

Now, not only is smoking not permitted inside or on the grounds of the schools I go to, but it seems that only a small minority of teachers are even smokers. This is a big change that seemed unimaginable in the late 90s.

Clearly some of these changes are more significant than others. It’s nice to see schools change their attitudes towards smoking. I miss the personal touch that the weekly visits from the bank employee brought to banking. I always struggle to have good conversations with the ATM. I enjoyed working as an ALT 22 years ago and I’m happy to be back in Japan working an ALT again. I wonder what changes will occur in the future?

For upcoming blogs see the blogs tab here:  http://www.alttrainingonline.com/blog.html
Posted by David Hayter at 8:32 AM