Debate in JHS by John Finucane 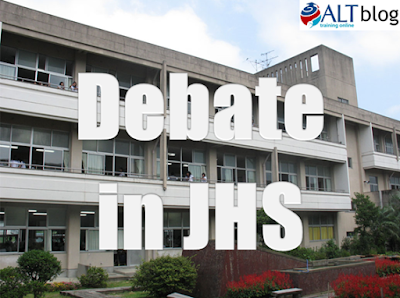 Bio: John is a high school teacher and debate coach based in the kanto. His interests include debate and critical thinking. To find out more visit www.letsdebate.jp

Don't trust boys. The single most useful thing I've read is Anthony Weston's Rulebook for Argument. Required reading for the formal reasoning module of my philosophy degree. Useful in a practical way. Something I value; even feel grateful for. Like all teachers with a passion for something I want to share it with my students.

A former student had a boyfriend. As young people do, she took a number of selfies. These were private and intended only for him. Boys, as they do, talk. A third person contacted her and claimed that because she sent these photos to her boyfriend, she should also send them to him.

If she had some critical thinking tools she would have recognized this as an argument by analogy. She would have been able to assess it, find it wanting and respond with confidence. Instead she was browbeaten into a decision that will have lasting consequences.

Young people have a strong sense of what's right and what's wrong. But, they often lack the ability to recognize, categorize and articulate their opinions. Consequently they lack confidence in themselves and their opinions and this makes them vulnerable to being coerced into doing things that they don't want to do, or know are wrong.

There are certain life skills like knowing how your body works, understanding what drives emotions or forming healthy relationships that are vital. Often neglected by institutions in favor of numeracy and literacy, their lack leaves our young people vulnerable to ill health, stress, depression and a lack of resilience. I see critical thinking as one of these skills.

I should be clear. By critical thinking I mean the ability to logically form an opinion and respond critically to the ideas of others. Simply, know what you think about something and why you think it. Without this skill people tend to rely on coercion or pestering rather than persuasion. This is the root cause of a lot of bullying. Among adults as well as young people. The Scottish Independence Referendum, Brexit and the 2017 American election being good examples.

Debate is often mischaracterized as adversarial. In fact, it's collaborative. Teams debate the proposition in order to discover the best solution to a problem together. Not to win. At least in theory.

Debaters debate the issue from both sides. They develop the understanding that we can hold opposite views on a subject with equally valid reasons. Your friend doesn't hold her opinion insincerely. As Republicans seem to view Democrats. Or out of stupidity or contrariness. As Democrats seem to view Republicans. She has her reasons and they make sense, whether you agree with them or not.

Debate, in my opinion, is the closest we can get to replicating genuine communication in the classroom. Especially the kind of problem solving, collaborative communication that University Admissions Officers and employers value. It's also the best way to develop critical thinking skills. But how does all of this this apply to our first grade Junior High School classes?

The debate skills are:

Next we think about the individual steps needed to reach each goal. We must consider available classroom time as well as the maturity levels of our students. Simply, make a laundry list of steps, arrange them in order of importance, compare them to your available class hours, cut where necessary. These steps can be represented by simple phrase patterns:

Now we have a series of steps we can plan individual lessons to help students move from one step to the next. This involves anticipating potential problems and creating classroom procedures to avoid or scaffold them. There are a few common problems with debate.

Firstly, students are not used to being asked for their ideas. They are used to being asked a question in one of a few standard formats. That’s important because they have learned that there is only one correct answer, being wrong is a bad thing and if they wait long enough, someone will give them the answer. Our students have learned to be passive. So, when we ask our students for their ideas they are often silent.

Secondly, it can be difficult to choose good debate topics. It’s not fun to debate about things we don’t know or haven’t experienced. Also, if the topic is difficult to talk about, our students will need a lot of preparation time.

A topic like ‘Sports clubs are better than cultural clubs’ is good because most students join clubs, and sports and cultural clubs are quite different. Students even go through a kind of recruitment period when they join a new school with each club trying to convince new members to join.

Thirdly, students experience stress when doing something unfamiliar or difficult. All the more so when asked to do it in front of peers. Depending on the age and maturity level of your students, there may be disruptive behavior, or students will use silence and appeals to ignorance in order to avoid risking seeming wrong or ridiculous.

When we do debate activities, we will move from one phase to the next quickly and without stopping. Don’t worry if students cannot finish, or seem unsure. The goal is to keep everyone busy all the time so that momentum is kept and there is no opportunity for disruptive behavior. We will always be upbeat and enthusiastic. The speed keeps the pressure on, but your low stress attitude keeps the pressure off.

Teaching debate and critical thinking is the same as teaching anything else. Start with goals. Be systematic. Be efficient.

The lesson plan for this blog can be found here:
http://www.alttrainingonline.com/blog.html